Select a Page:
Scroll to top

Schools Of Thought
No Comments

You may have heard of the energy that the Chinese call Ã¢â¬ÅChiÃ¢â¬Â, the Japanese call it Ã¢â¬ÅKiÃ¢â¬Â, in English it is called Ã¢â¬ÅThe AuraÃ¢â¬Â and Hindus call Ã¢â¬ÅPraanaÃ¢â¬Â. You may have even experienced this energy when you really thought about it, like a wave of energy through the body as you walk through somewhere. This is the energy that vaastu is designed to locate and channel into our bodies andÃ¢â¬Â¦into our house. It is said that everything is influenced by this energy, from our personal relationships to our ability to be creative to our moneymaking possibilities.
Everybody and everything has a place in this world. That is the essence of Vaastu Shastra. Whether it is through luxuries or by heavenly assistance, there is a place in your house for everything. A Vaastu Shastri has immense knowledge ranging from philosophy to astrology, and their aim as a practitioner of Vaastu Shastra is to balance out our needs as a human and our want for harmony. Vaastu Shastra finds its origin in the Stapatya Veda, a part of the Atharva Veda, one of the four main Vedas. The word ‘Vaastu’ in Sanskrit means ‘dwelling’, and in todayÃ¢â¬â ¢s modern world, covers all buildings.

Vaastu aims at maximising the generation and accumulation of positive energy around the humans and minimise the negative energy. This is done by ensuring the abundance of the following:

Air or Vaayu– Pure fresh air continuously blowing in and out of the house (essential to sustain energy.)

Water or Jal– For drinking and living (essential for life.)

Earth or Prithvi– Magnetism of the EarthÃ¢â¬â ¢s poles affects our internal body.

Space or AakashÃ¢â¬â Space is where energy is taken from.

Basic directions given by Vaastu are given:

Almost all the Hindu temples that were constructed in India several centuries ago were constructed according to the principles laid down by Vaastu Shastra. This is an astounding fact if you think about the technology required by todays construction companies to erect a building even the size of a house. Such huge mandirs have been built in the past and they are still standing today in Bharat and its surrounding countries.

What else is out there?Feng shui (which literally means wind and water) is also a widely used form of building and interior design in China and now the west too Ã¢â¬â aiming to create harmonious surroundings by balancing the yin and yang (opposing forces). But it can also be used in a negative way. A beautiful building in the heart of Hong KongÃ¢â¬â ¢s financial district is believed to be the cause of a downfall in the fortunes financial trading in Hong Kong. The building was designed by an architect who was given a task by the bank of China to make sure that its competitors do not gain anything by its construction. Instead, the architect created uproar in the whole of china because the building with its sharp edges and angled triangles were throwing bad Ã¢â¬ÅChiÃ¢â¬Â into its rivalÃ¢â¬â ¢s buildings.

Looking to the future.A fantastic Vedic city has been constructed in the USA by Tim Fitz-Randolph who conceived the idea of Vedic City in 1991 in Holland during a Transcendental Meditation program. Maharishi Mahesh Yogi took up his idea and soon the foundation stones had been laid. This wasnÃ¢â¬â ¢t just a little patch to build a house! Rather, the site was the size of a medium sized town in America. The scale of this city means that at any one time, as well as the population, people who come to the city to meditate can be accommodated for. As many as 10000 can be housed and fed just at the Maharishi University.

Now an inhabited city, its citizens are discovering the benefits of Vaastu. One man moved into the city in 1994 with his home business. After a few years of continuing business, his turnover had risen from $500,000 to over $500 million and his business is recognised as being one of the fastest growing in America. The city itself has been recognised as a fast growing city with many job prospects, all the while keeping the spiritual side of human nature satisfied.

So, does Vaastu make any sense?While numerous people still strongly believe in Vaastu, many think of it as an ancient science, which was useful in conditions prevailing in ancient times (in Bharat), but makes little sense today. It has become obsolete with the rise of modern cities with new sewage systems, multi-storied buildings with air-conditioners, exhaust fans in kitchens, advanced water systems and so on. But then there are cases where it can be seen to be a force, like in Hong Kong, the Vedic city or in Austria where students are not allowed to sit at a table for anymore than a week in case negative energy prevails over that spot.
There is no doubt that the Vedas have contributed to the world to this day. Knowledge is the key to the Vedas and all development can be traced back thousands of years because of this vast knowledge contained in our scriptures. Most people just live, others make life.

This science is complete in itself.
Happiness to the whole world it can bring
All the four benefits it bestows on you
Rightful living, money, fulfilment of desires and bliss
Are all available in this world itself
~ Viswakarma on Vaastu Shastra 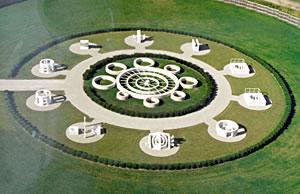